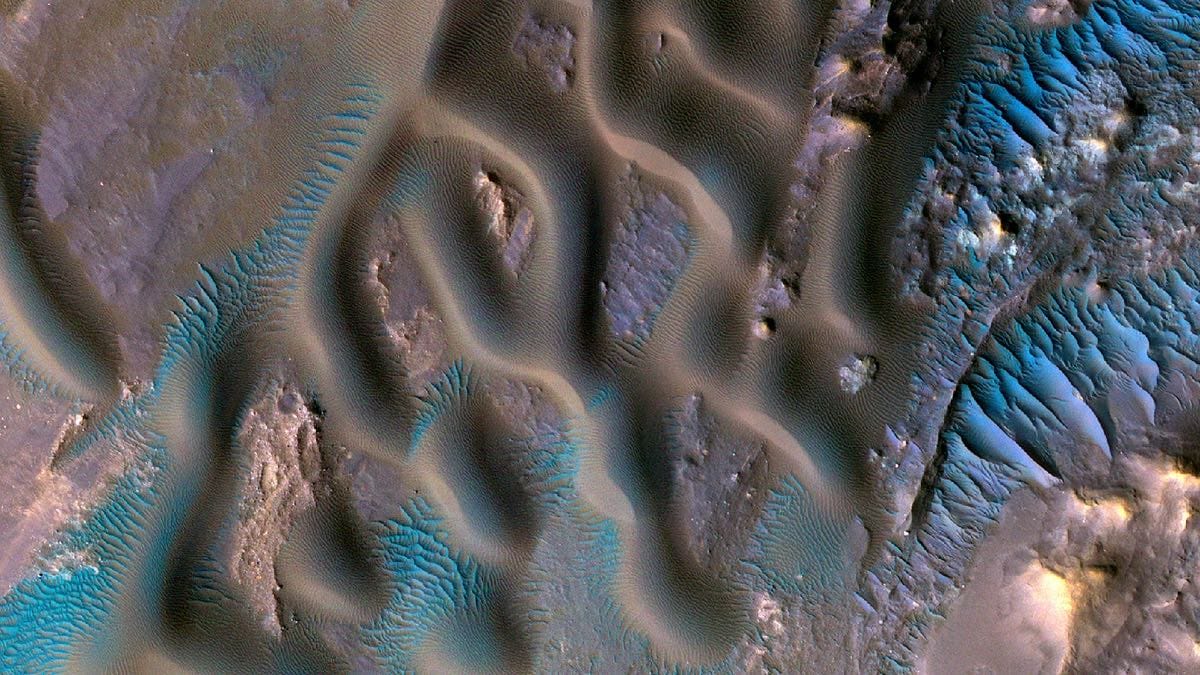 NASA’s Reconnaissance Orbiter has captured an intriguing picture of Mars. Taken near the centre of the Gamboa Crater on the Red Planet, the image features some blue ripples that look mesmerising on the planet with red surface. According to NASA, the picture is called a false-colour image that helps scientists learn about the weather and geology. The landscape, which was captured by the Mars Reconnaissance Orbiter (MRO) earlier this year, was processed in what is called false colour, which turns subtle differences in light wavelengths into stunning colour palettes that are impossible to miss.

A variety of wind-related features are also spotted on Mars in the image. Larger sand dunes from sinuous crests and individual domes are observed as well.

Tiny ripples formed on the tops of dunes that had just several feet between their crest. These ripples merged to form mega-ripples while being 30 feet apart and radiating outward from the dunes. In this formation, the larger and brighter ones that are roughly parallel to each other are called Transverse Aeolian Ridges (TAR). The TAR have been found to be covered with very coarse sand.

It is true that the augmentation is quite beautiful, but it wasn’t done just to give Mars a little extra glitz. By processing the data in this fashion, scientists have been given a highly useful tool to study the geological and atmospheric processes going place much below the orbital height of MRO. This shows differences in regions and features on the Martian surface.

NASA stated in a release, “The mega-ripples appear blue-green on one side of an enhanced colour cutout while the TAR appear brighter blue on the other. This could be because the TAR are actively moving under the force of the wind, clearing away darker dust and making them brighter.”

The space agency added that these characteristics can all be used to determine the direction of the wind at the time they formed. The ability to explore such diversity so closely together enables scientists to understand their relationships and compare and contrast aspects to learn more about their composition and formation.