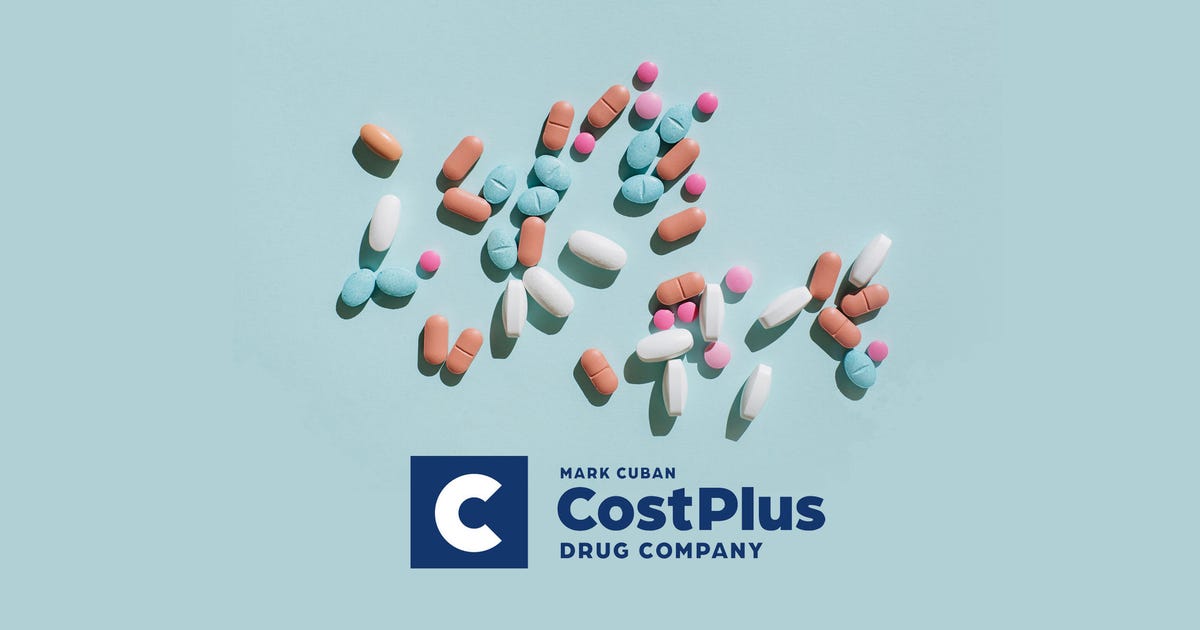 Get Lower-Cost Prescriptions at Mark Cuban Cost Plus Drugs: How It Works

The cost of prescription medicines has many Americans in a bind. Inflation is at a record level, but drug prices have risen even faster over the past decade, increasing 35% since 2014, compared to 19% for all goods and services, according to Healthcare Finance.

About 18 million people in the US can’t afford their prescriptions, according to a 2021 Gallup survey that also found 1 in 10 adults skip prescribed doses as a way of saving money.

To alleviate the burden of high drug prices, billionaire entrepreneur and TV personality Mark Cuban launched Mark Cuban Cost Plus Drugs in early 2022. The online marketplace offers prescription drug prices that are lower than most pharmacy list prices: A June 2022 study in the Annals of Internal Medicine found that Medicare could have saved $3.6 billion in 2020 if it purchased prescription medications from Cost Plus Drugs.

How does Mark Cuban Cost Plus Drugs work, why are its prices so cheap and how can you take advantage of those low prices? We’ll give you all the details on a service that could potentially save you hundreds or more per year on needed medications.

What is Mark Cuban Cost Plus Drugs?

Mark Cuban Cost Plus Drugs (less formally referred to as Cost Plus Drugs) was started by Mark Cuban and radiologist Dr. Alexander Oshmyansky, now the company’s CEO, as men were fed up with inflated prescription drug prices.

In a Feb. 2 televised interview on the The View, Cuban said, “When I see an industry that is just so convoluted and messed up like the pharmaceutical industry is, I saw it as a great opportunity, and that allows us to charge much, much less.”

The Cost Plus Drugs website launched in January 2022 with the aim of avoiding pharmacy benefit managers — intermediaries who negotiate drug prices with manufacturers for health insurance providers. PBMs have come under criticism for pocketing the negotiated savings as well as for a practice called “spread pricing,” where PBMs receive more money from insurers than was actually paid for the medicine.

A few weeks before its launch, Cost Plus Drugs created its own pharmacy benefit manager, allowing it to provide medications to companies with health plans. Cuban has promised Cost Plus Drugs’ PBM will be “radically transparent” in negotiating drug prices and will not employ spread pricing.

What medications are available at Cost Plus Drugs?

Cost Plus Drugs sells the top 10 most prescribed generic drugs in the US — atorvastatin, levothyroxine, lisinopril, metformin, amlodipine, metoprolol, albuterol, omeprazole, losartan and simvastatin — as well as many of the top 50 most prescribed medicines. (Although Cost Plus Drugs warns that some medicines have limited stock due to supply chain issues, a random check of 50 of its 337 medications found all of them were available.)

The site notes that it’s constantly expanding its inventory and provides a form for submitting requests for new medications. In his interview with The View, Cuban said that he hopes to be selling 2,000 medications by mid-2023.

Cost Plus Drugs is also in the process of constructing a $11 million, 22,000-square-foot facility in Dallas, Texas, to manufacture its own versions of generic drugs.

How much lower are prescription drug prices at Cost Plus Drugs?

Drug prices in general will vary considerably based on the provider and PBM. Cost Plus Drugs provides a comparison of a listed retail price and its own price for every medicine it sells.

Some of the savings are remarkable: 30 tablets of the generic version of the bipolar disorder medicine Abilify (Aripiprazole) retails for $678, whereas Cost Plus Drugs sells the same amount and dosage for $6.

However, retail list prices of prescription drugs may skew higher than what most people actually pay. Digital pharmacies such as GoodRx, Blink Health and SingleCare provide discounts and coupons that can bring down prices considerably. Even so, prices at Cost Plus Drugs compare favorably.

For example, a box of 30 tablets of the generic version of zegerid — commonly prescribed for acid reflux — currently sells for $20 at Cost Plus Drugs. Blink Health sells generic zegerid for $86, much lower than a listed retail price of $2,073, but four times more than Cost Plus Drugs.

The savings appear to be real for many prescription drugs. Thirty tablets of the generic version of the heart medication Toprol XL (metoprolol succinate) go for $3.90 at Cost Plus Drugs, compared to $24 per 90 pills (or $8 per 30) at Costco.

The generic version of the antidepressant Pristiq costs $18 at Cost Plus Drugs. Discount pharmacy GoodRx sells it for $25, the next lowest price we could find online. That’s far lower than the average retail price of $290, but more than Cost Plus Drugs.

In the offline world, we called a local CVS to discover the cost of a three-month supply of generic Lipitor (Atorvastatin), a commonly prescribed medicine for reducing cholesterol. We were quoted $362 without insurance. At Cost Plus Drugs, the same three-month supply of the 20mg drug sells for $6.

How do I order prescription drugs from Cost Plus Drugs?

First, you’ll want to view the list of medications available at Cost Plus Drugs to see if it has the prescription drugs you need. If it does, you’ll need to create an online account, verify your email address and enter basic information about your health history and any current medications you are taking.

After you’re registered with Cost Plus Drugs, you can provide your doctor with a paper form that includes all of the information they’ll need to submit your prescription.

Alternatively, you can ask your doctor to write a prescription that includes your name, email address, date of birth and any medications you take. The National Council for Prescription Drug Programs (NCPDP) Provider ID for Cost Plus Drugs is 4940208 and its telephone number for prescriptions is 833-926-3384.

Your doctor can also fax your prescription information or the paper form to 650-683-9775.

Why are prescription drugs so cheap at Cost Plus Drugs?

Unlike the mysterious calculations behind drug pricing at traditional pharmacies, Cost Plus Drugs uses a transparent method — the wholesale price Cost Plus Drugs pays for the medicine plus a 15% markup, a $3 pharmacy fee and a $5 shipping charge. Prescriptions are filled by the pharmacy services startup Truepill.

On the company’s mission page, Cuban specifically calls out the price of Albendazole, a drug used to treat hookworm, which continues to thrive among poorer communities in the Southeast US. (In a 2017 paper, researchers found more than one-third of the people in one Alabama county were infected with hookworm disease.)

Normally, Albendazole costs on average $441 for its daily dose of two tablets, which could be taken for up to 30 days. At a wholesale price of $26 plus $4 markup and $3 pharmacy fee, Cost Plus Drugs can sell those two tablets for $33, plus $5 for shipping. Multiply that $408 in savings for two tablets by 30 days and you’re talking about a potential difference of $12,240.

Cost Plus Drugs does not currently accept any health insurance. The site claims that, “even without insurance, our prices are less than what you would pay when using your insurance at a typical pharmacy.”

The company does work with some pharmacy benefit managers, though, and allows the use of prescription drug discount cards for their members. According to the Cost Plus Drugs website, PBMs that work with Cost Plus Drugs can have members pay the listed price on its website or the insurance co-pay amount, whichever is lower.

For more, learn how California is planning to make its own insulin to counter rising prices.

Published in How to

More from How toMore posts in How to »