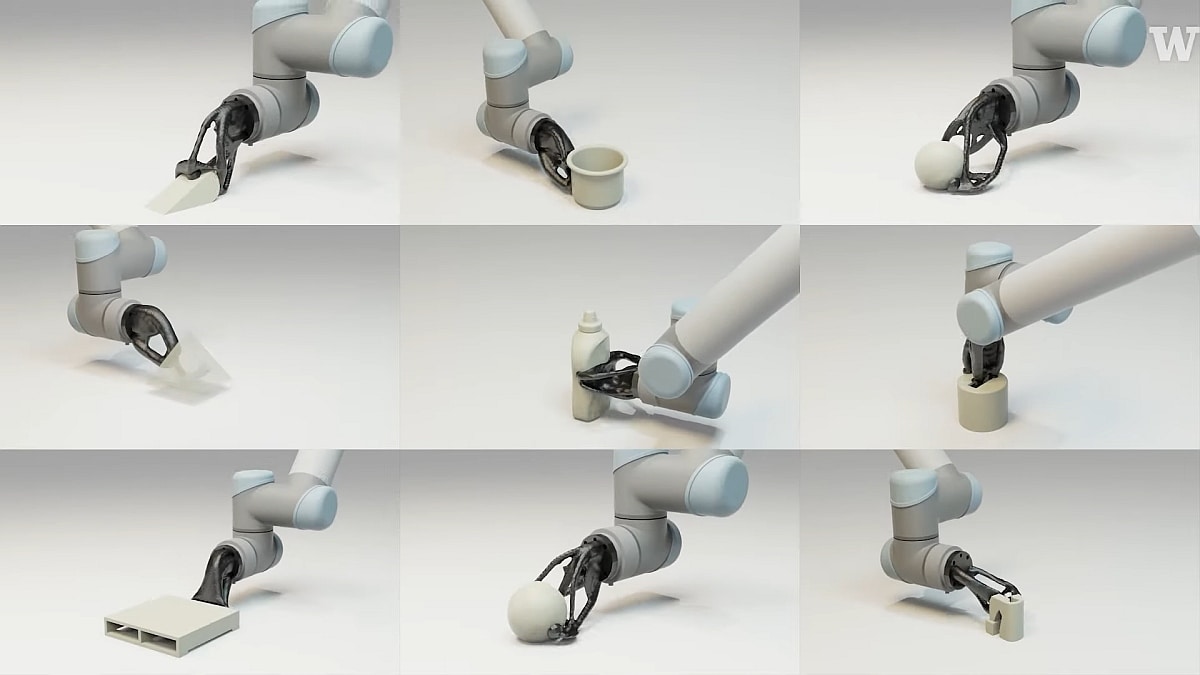 Watch: Robots With 3D-Printed Passive Grippers Can Pick Up Any Object

When the COVID-19 pandemic first started, automakers like Ford swiftly changed their production priorities from cars to masks and ventilators. These businesses relied on assembly-line workers for the changeover. As robots are confined to their routine activities, it would have been too difficult for them to make this transition. If a robot’s grippers could be changed depending on the task, it could theoretically pick up practically anything. These grippers might be passive, picking up objects without altering their shape, like the tongs on a forklift, to reduce costs. A team from the University of Washington developed a new tool that can design a passive gripper that is 3D-printed and can determine the most effective way to pick up an object.

The scientists put this technique to the test on 22 objects, including a drill, tennis ball, doorstop-shaped wedge, and a 3D-printed rabbit. For 20 of these objects, the designed grippers and routes worked as intended. The wedge and a pyramid with a curving keyhole were two of these. Both forms are difficult for various kinds of grippers to pick up.

These results will be presented by the team on August 11 at SIGGRAPH 2022.

Senior author Adriana Schulz said, “We still produce most of our items with assembly lines, which are really great but also very rigid. The pandemic showed us that we need to have a way to easily repurpose these production lines. Our idea is to create custom tooling for these manufacturing lines. That gives us a very simple robot that can do one task with a specific gripper. And then when I change the task, I just replace the gripper.”

Historically, since passive grippers can’t modify to fit the things they are picking up, objects have been made to fit a particular gripper. Jeffrey Lipton, the co-author of the paper, and assistant professor of mechanical engineering at UW, said that the tongs on a forklift were the most effective passive gripper in the entire world. However, the downside was that forklift tongs were only effective with specified forms, like pallets, “which means anything you want to grip needs to be on a pallet”.

A gripper could collide with the thing while picking it up if it were designed incorrectly. The researchers came up with a few crucial insights to tackle this problem. For the object to remain stable in the grip, the gripper’s points of contact with the object are crucial. This arrangement of points is known as the grip configuration, said the study’s primary author Milin Kodnongbua, a UW freshman. Kodnongbua added that additionally, the gripper must contact the object at those specified spots and connect those contact points to the robot arm as a single solid entity.

While building a new gripper and trajectory, the team first fed the computer a 3D model of the object and its orientation in space. Once the computer discovered a satisfactory match, it gave out two sets of instructions — one with the trajectory for the robot arm once the gripper has been manufactured and attached, and the other with the directions for a 3D printer to make the gripper.